Just as the UK government is making its final preparations for the fast-approaching Brexit Day, I am just wondering who is looking forward to the Transition Period, and all the drama that might follow it.

My super cautious and alarmed older brother, who is a British Passport holder, has already made his final visit to Germany in the weekend, just before the 31st of January, just in case rules change and it becomes a hassle for him to make a swift appearance to his mates. He never ceases to amaze me, and I am sure he is not the only one feeling this way in the UK. 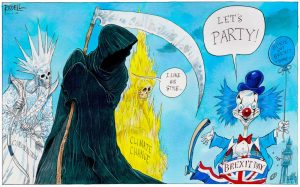 There is a lot one could say about the UK’s imminent departure from the EU. I am not mentioning the clumsiness of the 50p coin, which was introduced by the government to commemorate the Brexit, as well as the amusement I feel for the extravagant parties planned by the Brexiteers for Friday night.

The thrill of being an independent country again without any ties to the EU is worth of glass champagne, which must be a product of the UK.

The morning after Friday will make some wonder about the Transition Period, and the benefits of being an independent country will also be questioned, but there is no going back from this locked-in trajectory. The UK’s Brexit path was set in by the results of the UK’s in-and-out Referendum in 2016.

Though some EU member states (MS) may be feeling relieved that the UK is finally leaving, after years of political turmoil caused by uncompromising positions of all the parties involved. The Financial Times of 27th of  January reported that Dacian Cioloas, a former Romanian prime minister and leader of Renew Europe, the liberal, centrist political group 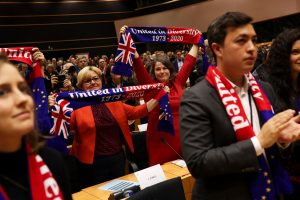 in the European Parliament, said: “For me, Brexit is a mistake of history and shows why the European project must never be taken for granted”.  Whereas some of the EU’s older members are less regretful about Brexit, for France London stood for excessive economic liberalism and kept blocking initiative that would have improved the EU’s cohesion and efficiency. ‘Bon débarras’ the French authorities may think.

The remaining 27 MSs, however, have more urgent problems to worry about, now that yesterday’s troublemaker is making its way out. The question is not about whether member states want more unity or less cooperation at the EU level. It is more about whether the core values of the EU, outlined in Article 2 of the Treaty of the European Union, are under threat. What ultimately thought to be threatening the survival of the EU, as we know it.

With the departure of the UK, the EU is beginning to close a chapter on a Eurosceptic member state, but its grip in keeping the remaining Eurosceptic MSs in line with the EU standards is proving difficult and critical. Poland and Hungary, who are the meddlers of the present and perhaps of the future too, are the first member states that come to my mind.

The Rule of Law debate

Yes, it is right that the governing political parties of Polish Law and Justice Party (PiS) and the Hungarian Civic Alliance Party (Fidesz) do not campaign against their country’s membership of the EU. Nevertheless, their policy choices put them at disputes with the EU institutions; let us not forget Poland and Hungary are suspected of having undermined the rule of law, and the Article 7 mechanisms were triggered against them in December 2017 and in September 2018, respectively.

The crisis of Rule of Law is a significant issue for the EU. Currently, there two developments underpinning the debate on the Rule of Law in the EU: (i) approval of a draft bill which allows judges who question the government’s reforms to be disciplined by the PiS controlled lower house (Sejm) of the Polish Parliament and (ii) the European People’s Party’s inaction on the suspension of Fidesz. 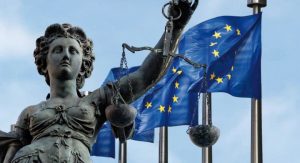 However Ian Bond and Agata Gostynska-Jakubowska’s ‘Democracy and the Rule of Law: Failing Partnership’ report, published by the Centre for European Reform (CER), attempts to pull in other EU countries, including France, Italy, Greece and Bulgaria, into the debate on the rule of law.

The report also mentioned the UK.  The tension between Prime Minister Boris Johnson and judges -during the prorogation of the Westminster Parliament in 2019- was highlighted as the Brexit-land’s moment of the problem with the rule of law.

What ultimately Bond and Gostynska-Jakubowska claimed is that apart from Poland and Hungary, there is a list of other countries undermining the rule of law in the EU. Thus they suggest that the European Commission should begin to treat member-states equally strictly rather than focussing exclusively on Central Europe, basing their arguments on the World Bank’s Worldwide Governance Indicators and The Economist Intelligence Unit’s Democracy Indexes. 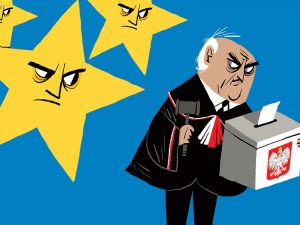 I am not sure if I am convinced with Bond and Gostynska-Jakubowska’s reference to the East and West divide in how the European Commission treated the member states differently and not equally. While the core values of the EU are under threat, the European Commission or any other EU institutions’ main priority is, of course, the protection and defence of the rule of law. Suggesting otherwise is undermining the supranational nature of these institutions

However I agree with them on the following recommendation they made in the report, which read as: “that EU institutions should engage more with civil society organisations involved in raising public awareness of EU values and principles, and do more to promote respect for the rule of law throughout the Union”. I am too convinced that if we do take more actions on the ground, where the rule of law is systematically undermined, change is more likely to take deep root. This is something I will keep an eye on…

Last but not least, the UK is departing from the EU on Friday, maybe it will be a sense of relief for some, but what is waiting for the remaining 27 MSs is more complicated than the one awkward partner they had to deal with between 1973 and 2020. I think the increasing number of infringement cases of the rule of law is here to stay, and the tensions will get higher between MSs and the EU institutions. Thus the UK’s occasional arrogance might be missed by the remaining members.