Days away from the Hungarian Parliamentary Elections, Hungarian Civic Alliance (Fidesz) and United for Hungary, the opposition camps are fierce in their campaigns, particularly in the message they pass to the electorate via billboards. In this piece, I like to draw comparisons between the billboards used by Fidesz and the opposition political parties, highlight which camp is using the billboards effectively, discuss the war’s effect on the slogans used and assess what this means for the outcome of the elections.

The use of billboards is a common practice during elections in Hungary, be that a Local or Parliamentary election. Therefore, since the elections campaign began in February, both camps have advertised on several billboards, and almost in all of them, each camp applied negative political advertising, attacking the other side. At times they have been misleading and humiliating, and other times they have been vague and intricate in messaging.

The average viewing time for a billboard is four seconds, during which time the billboard has to grab the viewer’s attention, hold it and be memorable with the right message. Furthermore, I am aware that the effectiveness of billboards is measured considering the following factors: the number of people or vehicles that pass a billboard per day and the number of people or vehicles that could see your billboard per day.  Since I do not have access to that sort of data, I am to assess the effectiveness of the billboards advertised by Fidesz and the opposition by evaluating how memorable, catchy, retainable, focused, and deliberative the pictures they used and the message they passed on are.

Below I will look into three billboards from each party, from large-sized billboards put along well-travelled roadsides to small-sized posters stuck to side roads. I will argue that while Fidesz’s billboards are relatively more memorable, focused and catchy, the opposition’s billboards embrace an agenda-setting effect that however suffers from a lack of focus and clear messaging. I am making an objective assessment here and not supporting either of the camps. Furthermore, my assessment draws on my academic observations of the election campaign and billboards, as you will see below.

Ever since Peter Marki-Zay was selected as the leader of United for Hungary in October 2021, the message the leadership in Fidesz wanted to give to the electorate was that Marki-Zay was not in control of the opposition. They claimed Ferenc Gyurcsány, the former Prime Minister, the leftist-liberal Democratic Coalition (DK) leader, was in charge. Therefore, Fidesz advertised their billboards concentrating on that theme: Marki-Zay is incompetent and not the true leader of the opposition.

In one of the early billboards below, Fidesz depicts Marki-Zay as the Gyurcsány’s clone; the ad’s wording says: “The boss has a new clone: Mini-Feri,” referring to the movie Austin Powers, starring Mike Myers and Verne Troyer.

Here Fidesz aims to mock and humiliate Marki-Zay by picturing him as a puppet. I do not condone any form of campaigning in which parties humiliate each other, but it is common in politics. This particular billboard effectively achieves its goal of weakening Marki-Zay’s image, since the picture used in the billboard is memorable and the message is a catchy one.

As the election campaign got underway, Fidesz kept stressing that Marki-Zay is not the leader of the opposition. The next billboard I chose to look at below does support that. 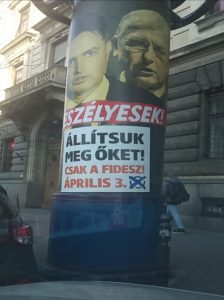 Gyurcsány stands behind Marki-Zay in the picture, and the wording says: “Dangerous! – Let us stop them”. I believe this billboard is trying to do two things. Firstly, it wants people to see the picture and think that Marki-Zay is not independent of Gyurcsány, so if they vote for Marki-Zay, they will get Gyurcsány in power. Secondly, it likes to instil a fear that the duo of Marki-Zay and Gyurcsány could be dangerous for Hungary, probably referencing Gyurcsány’s years when his government had lied about the state of public finances to the Hungarian people in order to win the elections in the early 2000s.

Whereas the third billboards below were put up after Russia’s invasion of Ukraine. 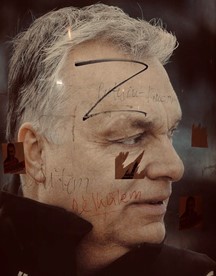 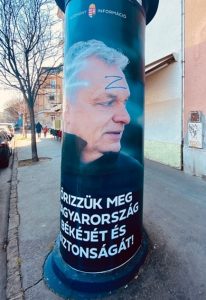 In the above posters, Fidesz advertises solo pictures of Viktor Orban, the incumbent Prime Minister, to present him as a competent and robust candidate for the highest position in Hungary. However, it was a complete failure. Not because of how the pictures on the billboards looked or the message was vague, the Ukrainian war meant that Hungarians seriously began to question Orban’s admiration and close relationship with Russian President Vladimir Putin. As you can see above, scribbles of the letter “Z” on Orban’s billboards appeared. This meant that the supporters of Marki-Zay associated Orban with the Russian Nationalist movement.

Compared to Fidesz, the opposition does not concentrate on a single theme in their billboards. One of the early billboards, which you can find below, highlights the importance of a debate between the two leading candidates for PM and how Orban is reluctant to debate Marki-Zay. 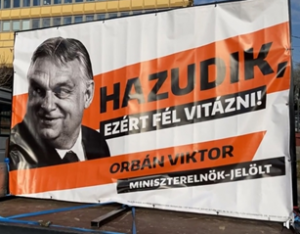 The message on the billboard says: “He is afraid to debate because he lies!”  I think this is one of the most effective billboards the opposition had advertised and it was powerful enough to change the agenda of the election campaign. To this day Orban is still questioned about why he is not facing Marki-Zay.

The reason for the effectiveness of the billboards lies in the bold and resonating message it had put out about Orban.  It successfully raises question marks on the electorate’s mind about why Orban keeps saying no to debates if only he were not confident. If I was advising the opposition, I would have nudged them to expand their propaganda on Orban’s refusal to debate Marki-Zay.

Later, however, as the war in Ukraine took over the World stage, the opposition opted to shift their attention to Orban’s relationship with Putin. Since Putin had become the most hated figure in Western and Eastern Europe, it made sense. Upon that, the opposition advertised the below poster: 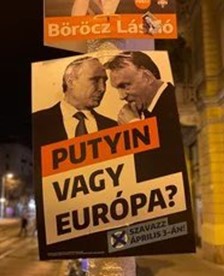 While this poster was supposed to make a powerful statement, I argue it suffers from mixed messaging. My observation is that the billboard wanted onlookers to think they had to choose between Europe, represented by Marki-Zay, and Russia, represented by Putin and Orban. The message on the billboard said: “Putin or Europe?”

However, as soon as I saw this poster, I thought there was something not right about it; and if I had seen it on the main road in my car when I only had four seconds to glance at it, I would have been confused. The problem is that the chosen picture and the message do not complement each other. How can an average Hungarian voter think that they have to choose between Marki-Zay and Orban when they are looking at a picture of Orban with Putin? How do you expect people not to associate ‘Europe to Orban” and “Putin to Putin”? I understand that the opposition wanted voters to look at this poster and think Putin and Orban are one, so they should vote Marki-Zay, who represents Europe. However, the billboard misses an excellent opportunity to make a compelling point.

The opposition published the below billboards two weeks ago–see below:

The picture is from a gathering on 15th March 2022 to commemorate the Hungarian National Independence Day. The message says: “The power is us”. I found the picture powerful; it depicts a large gathering supporting Marki-Zay, making him look powerful. Ultimately the picture and the messages resonate with the claim that the power lies in the opposition and its supporters.

In conclusion, the Hungarian elections will take place this Sunday. Polls show Fidesz and the opposition is neck and neck. The above study of some of the billboards advertised by racing political parties shows that Fidesz focused better on the message they wanted to pass on to the voters. In contrast, Marki-Zay’s camp missed an excellent opportunity to focus on a single and powerful theme. Nevertheless, the Russian invasion of Ukraine diverged the agenda of the election campaign for both parties, and probably the opposition benefited from this instability more than Fidesz. I guess the results of the elections will show that.

More articles from the blog

On the 3rd of April 2022, Hungarians will walk to the Polling Stations to vote on whether to keep the autocrat or opt for the socially conservative liberal democrat. This is one of the most critical elections in Europe this year since its outcome will determine if Hungary will drift further to autocracy or opt […]

As we were racing fast to leave 2020 behind, 2021 came as a slap on the face as the COVID-19 mutations promptly popped up in different parts of the World, including in the UK, Brazil and South Africa, which have made the successful vaccination roll out across the globe all the more crucial. While all […]

Over the past two months, I see that religion is playing a significant role in politics, both domestically and internationally. The UK and Ireland archbishops’ warning of the government’s  Internal Market Bill, ongoing confrontation between Turkish President Recep Tayyip Erdogan and the French President Emmanuel Macron over Islam and Secularism, and the Catholic Church’s […]

Since the lockdown was introduced in the UK in March 2020, some of the best scholars at the UK Universities and learned organisations like the Political Studies Association (PSA) and the academic association for Contemporary European Studies (UACES) had organised several conferences and talks, mainly on different aspects of online teaching in the light of […]

I am writing this piece in response to the Hungarian opposition political parties’ agreement to create a joint programme for government and stand single candidates against Hungarian Prime Minister Viktor Orbán’s ruling Hungarian Civic Alliance party (Fidess) in all 106 electoral districts. The Hungarian opposition’s pledge to unite and form an anti-Orban block for the […]

Polish Presidential run-off will take place on the 12 of July, that is tomorrow,  between the incumbent President Andrzej Duda, who won the first round of the presidential election on the 28  of June, and Warsaw Mayor Rafał Trzaskowski, who is the Civic Platform (PO) candidate, finishing second.  The question is what will be the […]

Online-Teaching and Learning, and Virtual Conferences in the light of a Global Pandemic | Why alliance formation among opposition political parties is not a good idea? | Should you feel Optimistic or Gloomy about the Rule of Law in Poland in light of Presidential Run-Off | Linking non-compliance with the rule of law in the EU to the management of the EU budget | Awkward partner is now out, the Rule of Law debate is here to stay |
Avatars by Sterling Adventures